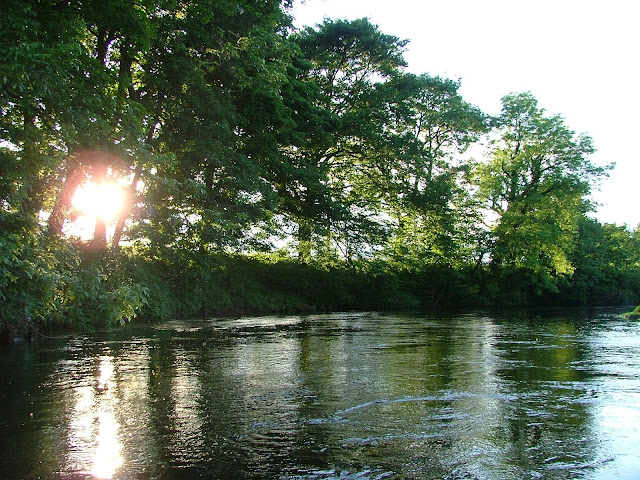 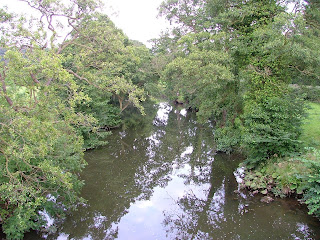 Ellastone has a reputation for being a real spirit breaker at times and can return the angler a broken man. Last night was one of those typical evenings with the fish not really on the fin. It looked really good from the bridge but I only managed three fish all evening, the last one was the best but it was taken in the dark. My successful flys were a grey duster variant the PP and the LTD sedge. I also tried various olive patterns and spinners during a sporadic rise but nothing really hit the spot, well not until I got a cold can from the fridge upon returning home.
With the benefit of hindsight the water was quite coloured which I would have expected to clear by now after last weeks rain. 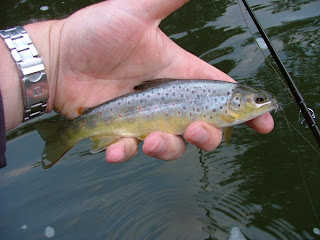 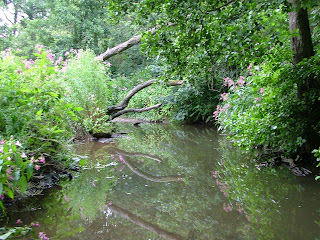 Last night I thought I had blown it upon looking over the bridge at Ellastone to find the Dove still the colour of drinking chocolate. Fortunately as plan B I had put my 7' #3 rod in the car and so drove over to Hazlewood.
The fishing on the Ecclesbourne is pure jungle warfare and by this stage of the summer it is very overgrown and the balsam is rampant. I did my share of pulling up but it would take an army to eradicate it. 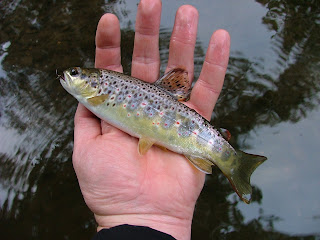 It is very hard work to trick the Ecclesbourne into giving up her treasures and last night I had a brace in just under an hour and a half which is good going. Both fish fell to a PTN and of the three fish I saw move I caught two so was quite pleased. The third ended up with me standing on tip toes to retrieve my fly from the canopy, not an unusual experience on this river. I hope you agree that although small the trout are great looking fish. They came from the two pools immediately upstream of the bottom pool by the bridge. I fished up til just past the cattle drink that has now been neatly fenced off. By this time I had got a right lard on as it really is graft battling through the undergrowth. The water had a slight tinge to it but was a damn sight more fishable than the Dove.
Things sound like they are getting moving on our impending house move so this may be my last trip for a while unless I can sneak out early next week. Tight lines all! 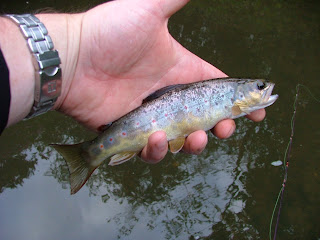 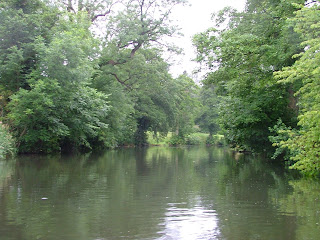 My rod from Steve Parton was long overdue a christening and last night the thought of that forced me up to the Dove when the weather was really telling me otherwise. Showers in Derby soon became persistent rain as I went west along the A50 but after being in all weekend needed a few lungfulls of fresh air without the kids bending my ear or the dog requiring attention.
It was blowing up the Dove valley and I could see the squalls passing over the bridge at Ellastone, ah well in for a penny as they say. The rod cast like a dream and is incredibly light. I have been fishing with a Snowbee 9' ZR2 for a while and although the Sparton is only 6" shorter it felt like I was fishing a 7'6" rod so really pleased with it. Only one small brownie came to hand and I dropped another fish off, both on nymphs. Good news then as it did not start out life with a blank and I'll look forward to some more hopefully productive sessions with it.
Balsam has sprung up with a fury at Ellastone this season so I pulled up a few clumps and would ask other anglers on the stretch to do the same. The exit from fording the millstream near the bridge was almost entirely choked with the damn stuff for those who know the beat.
Posted by Dave Cross at 20:47 3 comments: 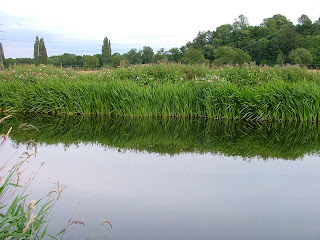 Yesterday evening I tried a stretch of the river I'd not fished previously. Some of the swims looked a complete picture and I found a barbelly looking peg with a line of reeds along the far bank. 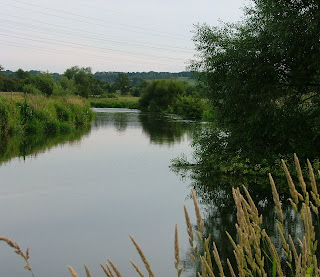 It was a beautiful evening and although I didn't commence until 2000 a real wind down after a day at work. Another angler soon passed me and we exchanged pleasantries but did point out that barbel were 'few and far between' on this stretch. 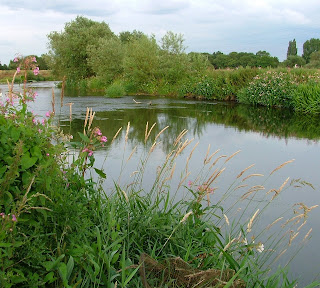 Well there were no barbs for me so he was right but I have had some good luck just recently and thought I was staring at a blank. At 2215 the rod went round and I caught quite a nice chub, guess about 5lb ish. I didn't weigh him as I was keen for one more cast before calling it a day. The picture of him is not brilliant I've had a bit of a lapse in photo quality and must try harder. This looks to me like it could be a very productive stretch but would need the hours putiing in to work it out. A busy summer ahead for me so don't know whether I'll have the time to do it justice. 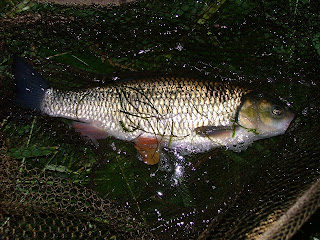 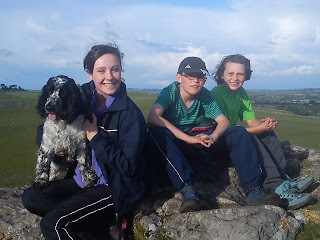 There have been showers on and off all day in Derby but I had a feeling about catching some good weather this evening so bundled the kids and the dog in the car after work and headed up to Dovedale. They thought I was crackers as we sat in traffic (25 minutes for the 4 miles across Derby, grrrrr) in a really heavy downpour but once we got past Ashbourne it cleared up. A quick stroll up Pointon's Glen to the stepping stones and then I managed to persuade the kids to traverse Thorpe Cloud. I'd forgotten my camera so we used Meg's phone for this shot on the top where it was quite bracing.
We rounded off the trip with a bag of chips and a can of pop in Ashbourne market place, it was a great evening to be out.
Posted by Dave Cross at 21:44 No comments:

Yesterday I managed a short session at Scropton as the day drew to a close. I found a nice swim where I expected the barbel to be feeding in mid water and put in several pouchfulls of hemp and pellets before tackling up. Then I set a new little record for myself of time to bank the first fish, my first cast was about 2000 and at 2015 I had returned a 7lb 7oz barbel. 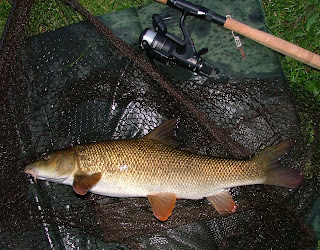 The fish were obviously on the feed as I've never had so many pulls and twitches on the rod tip throughout my session. About an hour or so later another firm pull resulted in the fish above which I did not weight but would guess about 6lb-ish perhaps a bit less.
The bigger barb was in great condition as can be seen below, unfortunately it is not my best barbel pic, I was thinking too much about getting him back in safely which is the first priority with these fine wild river fish. At 2215 the light was going fast and as I could only just make out the rod tip called it a day. 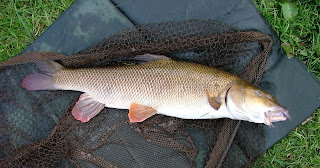 I've decided to blog my trip up the Pennine Way. If you enjoy the outdoors you might like this.
Posted by Dave Cross at 22:07 No comments: 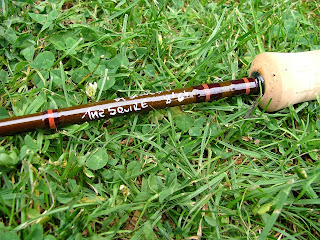 I've always fancied a hand built fly rod for the river, something not from the far east and made by a bloke that you can go and talk to. Upon hearing that Steve Parton was downsizing the retail side of his business I decided to take the plunge. 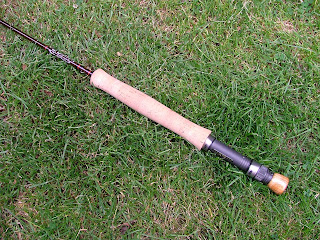 The rod is an 8'6" AFTM #3/4 two piece built on a Harrison blank. Steve has given it a couple of little personal touches, firstly the name which was a complete surprise and also a little hardwood button on the butt to avoid scratching my reel when the Kelly is on the go. I've yet to have a dabble but am sure it will be a corker. So there you go, a hand build British rod for less than the price of most middle of the road Chinese mass produced stuff.
Posted by Dave Cross at 18:40 No comments: 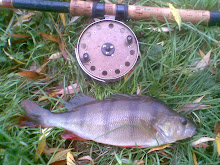